Our film about the first family who lived in the Venoge Cottage is nearly complete.

It’s been over a year in the making, so we thought it was time to rewind the tape and tell the story of how this production began. Looking back on it now, it really has been an amazing sequence of events. At that time, the structure now known as Venoge had become a victim of neglect and was one match away from going up in flames. Branded as fire fodder, the local fire department was ready to burn it down as a training exercise. Whether it was fate or destiny, Donna and Tom Weaver looked through the building before its inevitable demise. Being historic minded people, Donna and Tom searched for clues that could tell them about the age of the house.

They discovered something quite remarkable. Instead of the log structure they were expecting, the walls had been built using a French Colonial method of construction called post-on-sill. This style of timber framing used vertical posts resting on a timber sill. The void between the posts was filled with bricks, known as brick noggin. 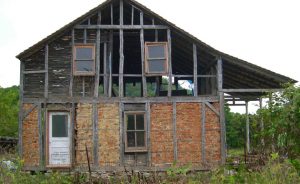 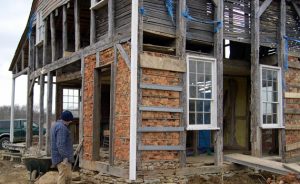 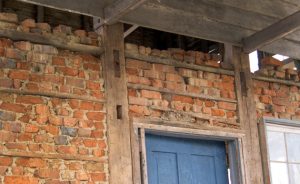 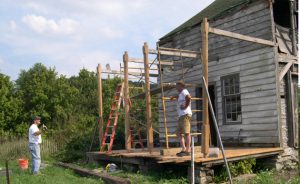 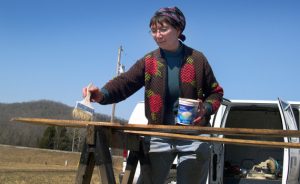 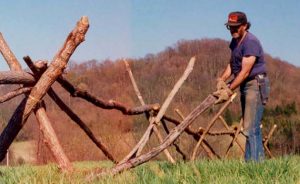 These types of buildings were associated with early French culture in the lower Mississippi Valley, making Venoge the only known example of post-on-sill construction this far east in the United States. With that revelation and negotiations with the property owners, the match was snuffed out and the fire drill canceled.

Following that fateful day, there were years of hard work to restore Venoge. A non-profit organization was formed to support the effort and countless hours of research yielded valuable information to help guide each phase of reconstruction. The search for the home’s history also revealed the name of the first family who built Venoge.

Once again, there was a surprise in store for the Weavers. As chance would have it, they shared the same last name with Venoge’s first homeowners; Jacob and Charlotte Weaver. While no direct bloodlines were found between the families, it was quite a coincidence. But the story doesn’t end there. Another intriguing twist was about to develop. Thirty-six letters penned by Jacob Weaver between 1813 and 1847 were found in the library of the Indiana Historical Society. That was like finding pure gold! The letters chronicle the family’s time in Switzerland County and the years they lived in the Venoge Cottage. Each page serves as a time machine, taking us back to the days when Indiana was still a territory and the challenges they faced in this new land. Jacob’s writings reveal both joys and sorrows; everything from his family’s births, weddings and deaths, to floods and famine, and the dangers ever present from disease, lawlessness and rabid dogs. It was such a compelling story; we knew it had to be told.

That’s when we reached out to fellow history enthusiasts to help us make this movie.

A premiere of the movie is planned for late summer 2020 in Vevay at the Hoosier Theater. We have our fingers crossed that by then it will be safe to gather together again. It will be a great celebration so we hope to see you there!

The accompanying festivities and reception will be held at Venoge afterwards.